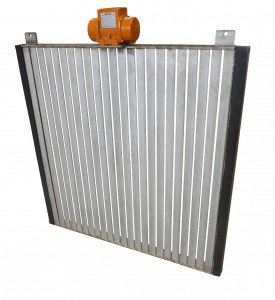 Feed pads and standoff areas on dairy farms have become increasingly popular over recent years.  Whilst there are many benefits the downside is the added pressure to the farm’s effluent systems.  In order to keep up with the increased solids, weeping walls which screen debris before effluent containment are used. Weeping walls have many benefits but can be troublesome and labour taxing when the screens blind off not allowing any fluid to weep through the walls.  To prevent overflow and any potential environmental hazards farmers need to manually empty the product and spread to pasture which is extremely time consuming and costly especially during wetter months.  We recognized this was an area of frustration for farmers and created a simple and amazingly effective product, The Vibe Panel – vibrating weeping wall

The Vibe Panel is a vertical passive separation screen, in basic terms a ‘vibrating weeping wall’. The vibrations travel down the horizontal panels to clear blocked slots in the screen which then causes the containment to de-water. The vibration allows effluent to move easily through the slots and into containment ready to be irrigated to pasture.  Having the Vibe Panel unblock the screens drastically decreases the labour intensity for our customers who no longer have to spend as much time managing quickly filling bunkers with the added benefit of capturing higher quality effluent. In recent tests we have had huge success with only installing a singular panel. 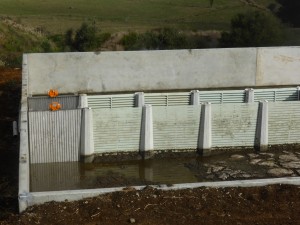 Customers who have had the Vibe Panel installed have been amazed by the quick results and impressed by how much it has lessened their work load.

Tihiroa Dairies Ltd invested in an upgrade to the effluent system on our new 800 cow Waitomo Farm.  The decision was made to put in two concrete sumps containing weeping walls.  After a short period of time the sumps were full and the walls weren’t able to keep up with the demands put upon it.  After discussing the problem with Shane at Pumpn we decided to replace a section of the weeping wall with Pumpn’s new stainless Vibe Panel.  The system is working very well, the sumps are keeping up with the capacity and only need to be emptied twice a year, unlike the old system which we were cleaning out every two months.